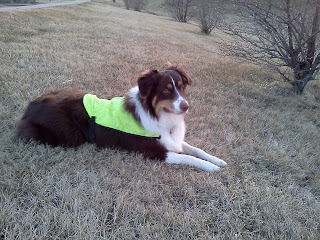 My experience with Comet over the year I had him was educational, frustrating and sad.  I learned an enormous amount about training a fearful dog. I learned a lot about a dog's body language and the different signals a dog will give before he or she lashes out.  Over the years I think quite a bit about him and the relationship we had. He was devoted to me but only me in our home and out. He was a one person dog. The rescue felt he would do better in a single person home with no kids.   We spent an enormous amount of time together on walks, running errands in the car and at training lessons.  He loved the Walky Dog.  It is a snap on attachment to a bike with a spring loaded leash on it. Actually a neat idea. It keeps your dog a good distance from your bike and he can run along side you.  Comet would just run as fast as he could for about 3/4 of a mile.  He had such a strong prey instinct he would pull me as fast as he legs could go when cars past by trying to catch them.

On occasional walks we would come across a flock of geese around a small pond near our home.  It is a half completed subdivision so there were times there were geese and no people.  Comet had a good recall so I could let him go and he would run out chase the geese away and return.  At the time I though nothing more of it than a way for him to expend some of his Aussie energy.  It was a game he seemed to enjoy and I got a rush watching him do it.  Upon the return of Comet to the Aussie Rescue, they felt that I had done so much for him that they would allow me to adopt another dog, should I desire, in the future at no cost.

I guess it was the following January that I got the Aussie bug again. Cosmo was a cute Red tri Aussie we discovered and decided to adopt. After a year of obedience training and Comso's excellent recall, we began the game again of chasing geese off a local property for fun.  People would routinely ask us to chase geese from their yards when they saw us walking by as they had seen Cosmo do his thing for fun.

It was by chance I had mentioned this to a friend of mine who replied that his brother in law uses dogs to  get rid of nuisance Canada geese on the east coast.  His name is Pete Rizzo and his company Hudson Valley Wild Goose Chasers  was doing quite well. After a few informative phone calls with Pete I felt Cosmo was a good fit to be a goose chasing dog.  So it was often that we would visit this neighborhood property to test and hone our goose chasing techniques.  We could not do it too often because the geese would leave and not come back.  So Cosmo and I would set up a routine where we could visit enough to practice but not enough to lose our training geese.  We took sheep herding lessons to fine tune our skills and commands. Soon the geese caught on to us and left. That is when we started looking for other areas to practice that had geese.

It was in the fall of 2011 that I decided to make the leap and start a goose control company. We chose the name Rescue Me Goose Chasing.  It has a couple meanings. The firs is that we are using Cosmo, a rescue dog, to start with. Second, we are rescuing people and places from the nuisance geese that are ruining their grass, curb appeal and outdoor experience. 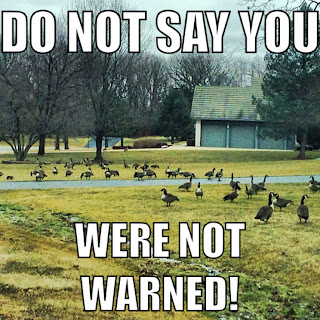